The Chart Toppers Tour is the perfect show for tweens to young adults. It stars tributes to Ariana Grande, Taylor Swift and Bruno Mars. With millions in combined album sales, Billions of Youtube views and a plethora of awards, these superstars have solidified their positions in pop music history.

Ariana Grande is an American singer, songwriter, and actress. A multi-platinum, Grammy Award-winning recording artist, she is known for her wide vocal range.

Grande has received various accolades, including one Grammy Award, one Brit Award, two Billboard Music Awards, and three American Music Awards. She has amassed over 30 billion streams on streaming platforms like YouTube, Spotify, and Apple Music and is the most listened solo female on the latter two. An influential figure on social media, she is an outspoken feminist and supporter for LGBT rights. She asserts control over her public image and is known for her ponytail hairdo and bold fashion statements. In February 2019, she became the most followed woman on Instagram. Time named Grande as one of the 100 most influential people in the world in 2016 and 2019, and Billboard recognized her as the “Woman of the Year” in 2018.

Natasha is the embodiment of the petite popstar. Her powerhouse vocals, uncanny resemblance and sweet demeanor make her the perfect person to pay homage to one of the world’s biggest stars. A classically trained vocalist, Natasha has the stamina and range to deliver a knockout performance every time.

Taylor Swift is an American singer-songwriter. At age 14, she became the youngest artist signed by the Sony/ATV Music publishing house and, at 15, she signed her first record deal.

Having sold more than 50 million albums—including 37 million in the US—and 150 million singles, Swift is one of the best-selling music artists of all time. She has won 10 Grammy Awards, an Emmy Award, six Guinness world records and is the most-awarded act at the American Music Awards (29 wins) and most-awarded woman at the Billboard Music Awards (23 wins). As a songwriter, Swift has been honored by the Songwriters Hall of Fame and Nashville Songwriters Association, and was included in Rolling Stone’s 100 Greatest Songwriters of All Time list in 2015. She has appeared in Time’s list of the 100 most influential people in the world (2010, 2015, 2019) and was ranked first in the Forbes Celebrity 100 (2016 and 2019), further being the youngest to be featured in the magazine’s listing of the 100 most powerful women (2015). In 2019, Billboard placed Swift at number eight on its list of “Greatest of All Time Artists”—the highest for an artist that debuted in the 21st century—and named her Woman of the Decade (2010s), while the American Music Awards named her Artist of the Decade (2010s).

Alli is the perfect person to portray this young icon. Her vocals are reminiscent of Swift’s country darling past mixed with the ferocious popstar you hear today. Alli’s fantastical stage presence will have you feeling starstruck.

Bruno Mars is an American singer-songwriter, multi-instrumentalist, record producer, and dancer. He has sold over 130 million records worldwide, making him one of the best-selling artists of all time. He has released seven number-one singles on the Billboard Hot 100 since his career launched in 2010, attaining his first five faster than any male artist since Elvis Presley. Mars has received many awards and nominations, including eleven Grammy Awards, three Brit Awards, three Guinness World Records, and was named one of Time’s 100 most influential people in the world in 2011. In December 2013, he ranked number one on the Forbes 30 under 30 list. Mars is known for his stage performances and retro showmanship. He is accompanied by his band, The Hooligans, who play a variety of instruments such as electric guitar, bass, piano, keyboards, drums and horns, and also serve as backup singers and dancers. Mars performs in a wide range of musical styles.

Ajay embraces Bruno’s style and swagger as his own. He is an incredible vocalist and showman bringing big concert experiences to a stage near you!

The Chart Toppers will have audiences singing and dancing along to all of their favourite songs. All lyrics are clean with authentically styled costumes. Plus our surprise guests make for exciting duets!

Choose from two, four or more dancers, a live band or simply to track.

You’ll drip with ‘Finesse’ and ‘Break Free’ in “Style” to songs in this one of a kind pop show. 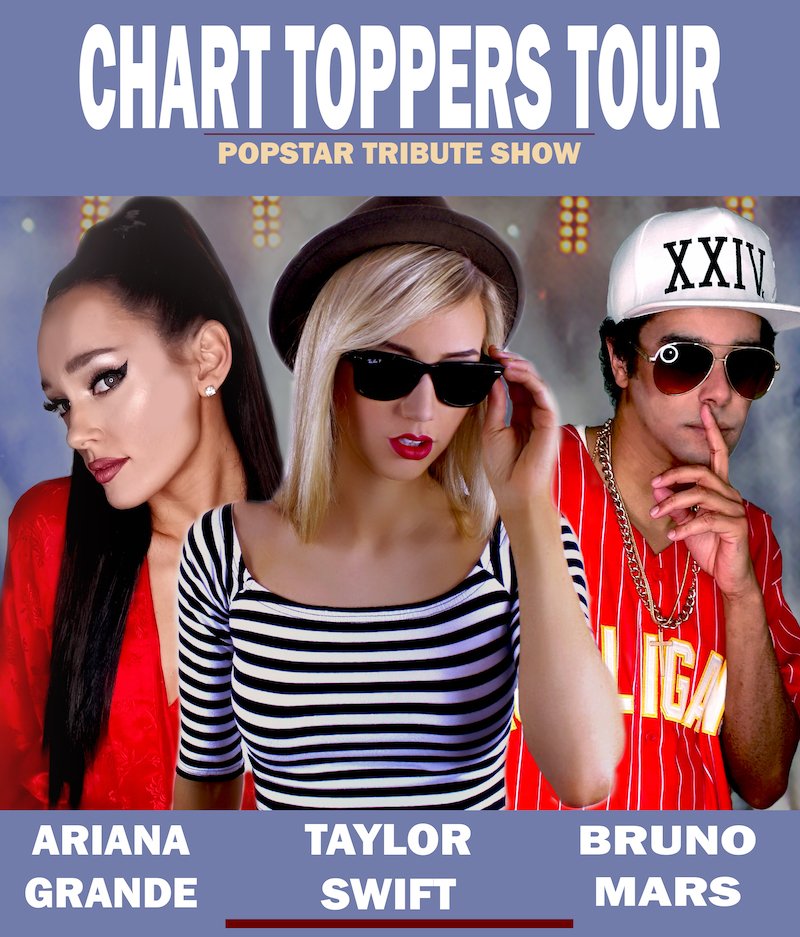 Taylor Swift
I Knew You Were Trouble
Love Story
22
You Belong With Me
Shake it off
We Are Never Getting Back Together
Look What You Made Me do
Are You Ready For it?
Bad Blood
Tears On My Guitar