If you’re looking for crude, nude and rude, we’ve got it for you! Tony Lee puts on a hilarious and entertaining hypnotism show. Want to know if hypnotism is real? Your opportunity is here! Prepare to be AMAZED!!!

TOUR FACTS: Tony Lee show has sold out more University and College performances and received more awards than any other performer in Canadian History. With over 5000 sold out performances in the past 2 decades.

Current Canadian Campus Awards include 10 Awards and 21 Nominations in 3 categories: Entertainer of the year, Comedy and Variety Artist.

Other Artists to receive Canadian Campus Awards including

Thanks for all the media support.
Chortle ***** (five star review)
I went to Tony Lee feeling a little trepidatious, so dragged a reluctant husband with me. We had heard all the stories of what Tony Lee persuades audience members to do: getting naked, simulating sexual acts and so on. But what everyone failed to tell us is what a good-natured show this is.

Lee is a nice guy. He does not want to make a fool of anyone for his own gain. He wants everyone to have a good time, so he moves through the audience, hands out vodka, downing shots with punters and creating a party atmosphere.

He is a fabulously charismatic performer with a cheeky sense of humour and a resounding deep, sexy voice. No wonder people fall under his spell.

My perception of hypnotists had been of smug, smarmy, superior men who lord their mysterious powers over us. I could not bear the thought of sitting through a show in their company. Lee, a Chinese Canadian, has none of this. He does not want to mystify the art. 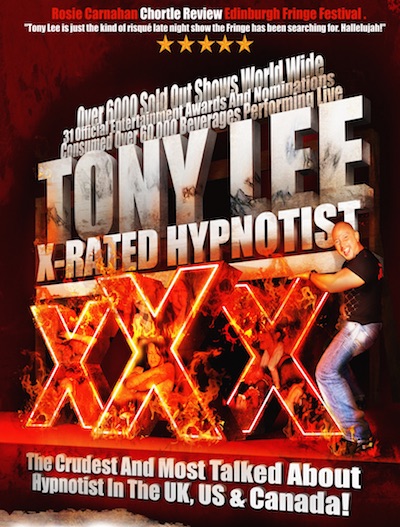