Mat Gauthier is an extremely talented singer, comedian, musician, songwriter, and impressionist, who is making his mark on the world stage.

Experience
Mat Gauthier started recording parodies at the age of 10 with guitar, keyboards, bass and drums. Throughout the years, Mat has built versatility in his voice by recording these parodies without realizing that it would eventually be the key to developing his voice for impressions. Mat coordinated a concert in March of 2002 that consisted of singers and musicians, and decided to give the audience something very different from the norm, a singing variety act. The audience loved it so much that before he knew it he was getting calls from corporate events, parties, church’s, festivals…wherever there was a need for entertainment!! In 2004, Mat won the ‘Rising Star’ competition in the World Tribute Artist Championships. In 2005, he was chosen as one of the top two finalists at Canada’s Great Impressions Contest, sponsored by the Comedy Network. Mat currently resides in Sarnia, Ontario.

Mat’s powerful 5 octave range allows him to cover genres of music from the 50s to the music of today. His 5 octave range takes off a lot of the limits as to who he can imitate. It gives him an edge when he does impressions of females, like Edith Bunker. His range allows him to sing songs by Sinatra, Axl Rose, Andrea Bocelli, Sonny & Cher, Phantom of the Opera, Ozzy Osbourne, Steve Perry…..and the list goes on.

Throughout the years, Mat has built versatility in his voice by recording these parodies without realizing that it would eventually be the key to developing his voice for impressions. Mat describes his show: “I approach my show as does a comedian. I take clips of popular songs, change the words to funny/awkward/silly everyday situations. Each clip can be from 10 seconds long to 2 minutes long. It is much like a comedic routine, but I am singing various artists, and the punch-line is in the song. All the wigs, costumes and props I put on, make an exhilarating show.”

Why hire Mat Gauthier? One thing that Mat can say is that he has never done the same show twice. He always tries to condition his show to the general age group of the event. He is overwhelmed by the tremendous response from people when the shows are finished. People tell him that they laugh so hard they cry. Elderly people have told him that they haven’t laughed so much in 40 years. “When I hear people say that, I realize that laughter is simply not practised enough,” says Mat. And he says, “My show is rated “G”, so I can safely say that it is for all ages.” 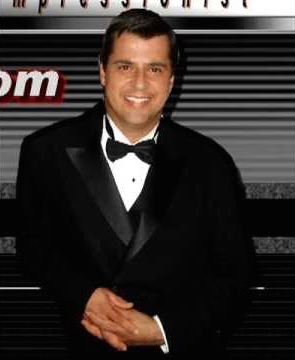 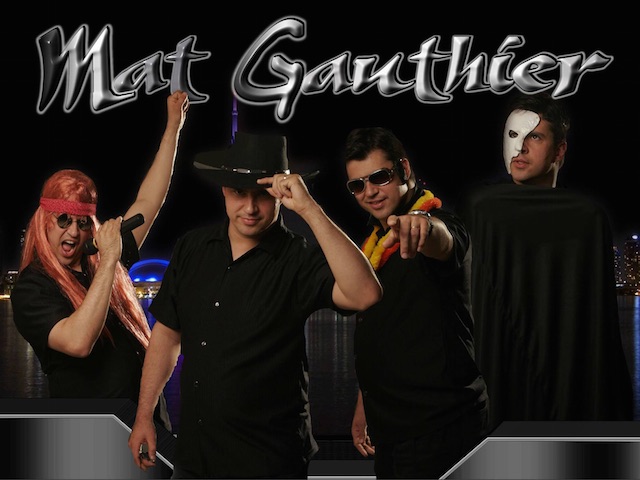 “We where extremely pleased and Mat Gauthier far exceeded our expectations. He was the hit of the conference, with his energy lifting the entire crowd to their feet in appreciation of his incredible performance. Not having seen Mat perform prior to selecting him from your web-site clips I can honestly say they do not do him justice. His performance far exceeds what you see on line. I would not hesitate to utilize Mat again and will recommend him highly to any of our clients who are interested in top quality, energetic entertainment.”
– Advantage INTRAVEL

“You were the perfect choice for entertainment at this year’s banquet: you were able to perform for a wide variety of ages and interests, you kept everyone’s attention during your performance, and your performance was full of energy, and enthusiasm. I was very impressed with the content of this show. I would highly recommend you to any individual or group looking, for an entertaining show. You were very pleasant, never demanding, and very cooperative. Many guests remarked that they enjoyed your performance, and declared the evening a hit! Thank you for making our evening enjoyable. Good luck and continued success!”
– County Of Lambdon

“Everything about Mat’s performance was entertaining and everyone from age 5 to 85 had a great time It is usually very difficult to find entertainment that has appeal to an age group as diverse as the people attending our event. Every one is still talking about the great job you did and how much they enjoyed their special evening. Thanks again for one of the most entertaining evenings we have ever experienced. YOU ARE THE BEST!”
– Victim Assistance Services of Oxford County

“Mat displayed a wealth of talent with his creative impersonations and exceptional voice, He kept the audience awed as to how right-on his impersonations were. This young man has a terrific personality, is extremely talented and is going places. He is definitely in the right field, and has an exceptional ability to make people laugh. The Christmas party was a success, needless to say, because of Mat’s entertaining show. I highly recommend Mat Gauthier, a truly talented young man, to any establishment wishing to hire him. You will not be disappointed.”
– Sheraton Fallsview