Jimmy Buffett – Parrots of the Caribbean

The PARROTS OF THE CARIBBEAN, a.k.a. POTC Band, is the High Energy, Original Trop-Rock Stage Show that “Puts the ROCK in Tropical Rock” as we feature a “Salute to Jimmy Buffett.”

Biography
Lead singer and Kettering, OH native, Dave Albrecht, has developed an uncanny likeness to Buffett in both looks and sounds as he has emulated Jimmy for over 10 years. Dave also does a mean “Elwood” Blues impersonation. Twenty years ago he and a nine piece band were signed with “Legends in Concert,” a top ranked show based at the Imperial Palace Casino in Las Vegas. In the year 2000, Dave switchedgears and created the Jimmy Buffett persona, even fashioning Jimmy’s harmonica style by listening to Greg “Fingers” Taylor (from Buffett’s Coral Reefer Band).

*** Jeff “The Hawaiian Hillbilly” Cline plays lead and rhythm guitars, as well as providing lead and backing vocals. Jeff’s guitar work and songwriting skills have won him numerous awards over the years, and his work is well known in this region of the country. Bands that Jeff have played with include Renegade, Midnight Highway, and J.D. Cline. Jeff has opened for such acts as Eddie Rabbit, John Conley, David Alan Coe, and Hank Williams III. Throughout Jeff’s career, he has played it all…rock, blues, fusion, funk, country and pop, resulting in the monster guitar player he is today.

*** Kenny “Tips” Rice, affectionately called “The Professor” is a keyboardist extraordinaire! Kenny’s been playing since he was 8 years old. Classically trained, he has been a professional musician for over 40 years. Performing all musical genres worldwide, he is a “Funk Master” on keys. He is also accomplished in band direction, music arrangements, and studio production. Kenny, as a pianist / keyboardist, was active in “Up with People,” founding member of progressive rock band “Flyweil,” and long time keyboardist for the eclectic rock band “The Hathaways.” He’s performed on the Tonight Show, HBO, and has opened for such artists as Edgar Winter, Cheap Trick, Tower of Power, Eddie Money, Rich Little, George Carlin, Michael Bolton, and Willie Nelson.

*** Gary “Riptide” Rigmaiden is a seasoned bassist, guitarist, and songwriter. He has been playing professionally for over 30 years. Gary spent a portion of his youth living in Spain and Brazil, but was born in Lake Charles, Louisiana, and says that living there made it easy to understand the philosophy and musical approach of Buffett. The island songs of the sea, bayou themes, and beachcomber blues make him feel right at home. Gary was a founding member of the progressive rock band, “Arch Rival,” which has five albums to their credit.

*** Greg “Great White” Martin, sings lead and backing vocals, and is the band’s monster Drummer and Percussionist. Playing a custom built Eames drum kit, he’s well versed in many styles of drumming, having played professionally for over 35 years. Greg has recorded and played live with numerous bands in support of national and international recording releases throughout his career. He was also a founding member of the progressive rock band, “Arch Rival” with five albums to their credit, and has performed with “The Menus,” Jake & Elwood’s Blues Review,” “Groove Therapy,” “Voodoo Stew,” and with Eric Hilgaford. Greg is a powerhouse of a drummer and is not to be missed.

Description
Quality musicianship from seasoned professionals, performing our own original hits, a blend of Zydeco, Rock & Country, plus Buffett’s biggest songs have earned us the acclaim as the “#1 Jimmy Buffett Tribute Act in the Country,” delighting audiences throughout the U.S. & Canada for over a decade! And in April, 2012 we were honored to perform for our Troops in Okinawa Japan! While there, we were told by the officers, that not only did they “Love the Parrots of the Caribbean” but we were the “Best Tribute Act they had ever had”! What An honor that was!! 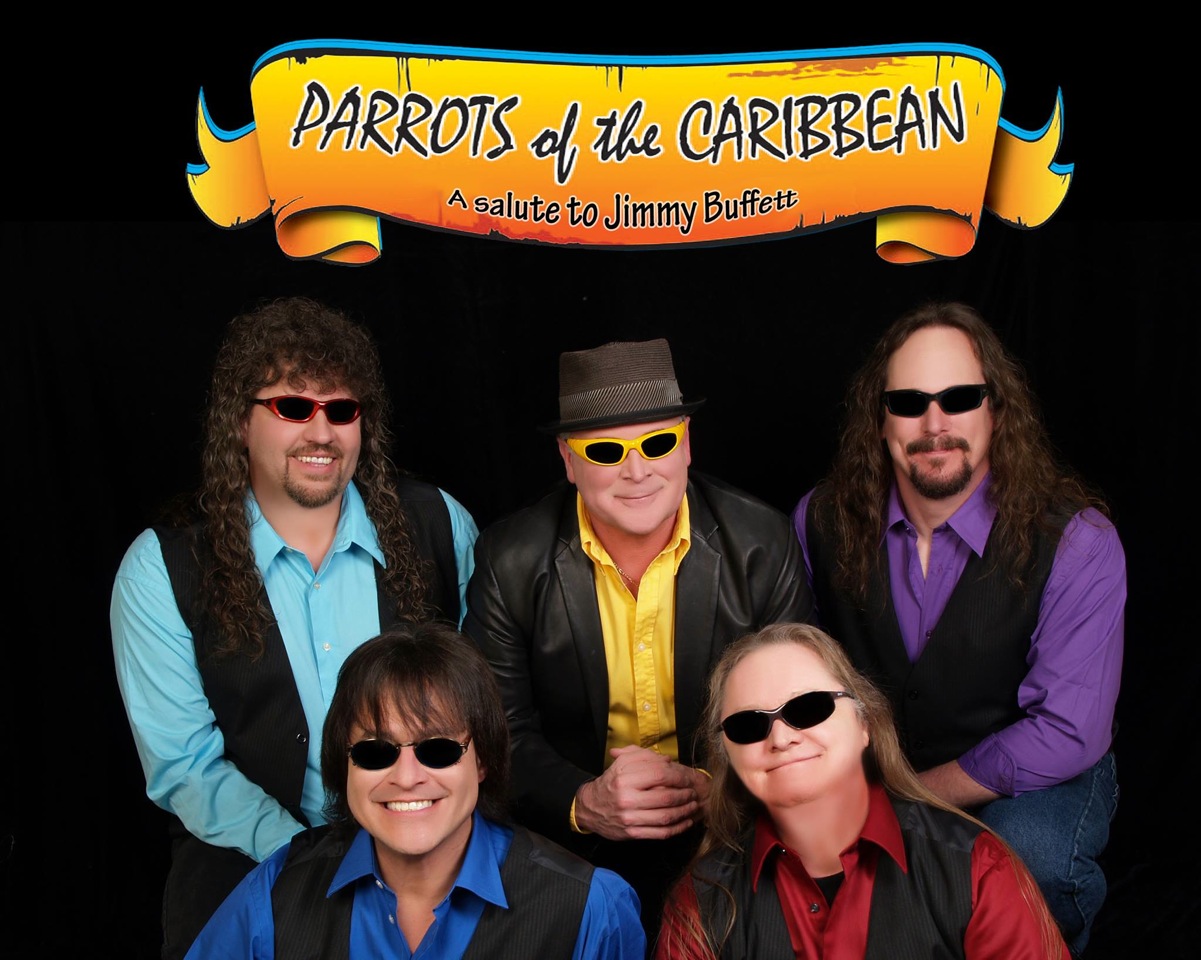