MEMORIES OF THE RAT PACK is a celebration of the lives and music of the three most famous members of The Rat Pack: Frank Sinatra, Dean Martin, and Sammy Davis Jr. In two 50 minute acts divided by one intermission, we learn about the men behind the legend, enjoy 30 of their more popular songs, and experience a recreation of the famous night club act at The Sands Hotel in Las Vegas.

Act One opens with an ensemble rendition of Sinatra’s Witchcraft, followed by a brief explanation of the birth of The Rat Pack. We are then treated to Frank Sinatra singing I’ve Got You Under My Skin, and I’ve Got The World On A String, and we learn about Sinatra’s roots on the streets of Hoboken, New Jersey, as well his special crooning style and popularity with the ladies.

Dean Martin then sings You’re Nobody Till Somebody Loves You, and That’s Amore, and we learn about his younger days in Ohio, his early boxing career, and his minor success on the New York club circuit.

We are then introduced to Sammy Davis Jr. who sings You Can’t Take That Away From Me, Mr. Bojangles, and Black Magic. We learn that Sammy Davis Jr. is considered the greatest entertainer of all time. The consummate variety artist, he was a singer, an actor, a dancer, and a musician.

The first act then turns its attention to the success of The Rat Pack and their infamous “Summit at the Sands” in 1960, when they went to Vegas to shoot scenes for Ocean’s Eleven, while simultaneously playing The Sands Hotel and Casino at night. The ensemble sing the number one single of 1964, Dean Martin’s Everybody Loves Somebody. Their important contribution to putting an end to racial segregation in the United States is recognized, and their endorsement of John F. Kennedy is remembered in a rendition of High Hopes, which they performed in the Democratic Convention in Beverly Hills in 1960.

After a brief intermission, we are transported to The Sands Hotel in Las Vegas. “Direct from the bar,” Dean Martin appears on stage, decked out in tuxedo, with cigarette and scotch in hand. He sings humorous renditions of When You’re Drinkin’ (When You’re Smilin’), and I Left My Heart In San Francisco, and he finishes his set with a soulful, authentic version of Volare before clearing the stage for “The Chairman of the Board.”

Frank Sinatra enters during the explosive horn introduction of Saturday Night Is The Loneliest Night Of The Week, and after singing the song, has some fun with the audience. Sinatra then sings an upbeat medley consisting of You Make Me Feel So Young, Come Fly With Me, Young At Heart, and Fly Me To The Moon.

Sammy Davis Jr. is next up, and he sings Strangers In The Night as well as his first number one hit, What Kind Of Fool Am I. He then launches into Funny That Way, but before he gets very far, the kibitzing starts as Sinatra and Martin begin heckling their friend from backstage. Sammy then tries another tune, Hey There, and this time, Sinatra and Martin appear on stage in grass skirts dancing the hula.

From this point on, the famed nightclub act from Las Vegas is in full swing, as the three friends carry on with their crazy antics and sing such classic songs as Brazil, I Can’t Give You Anything But Love, Too Marvelous For Words, Pennies From Heaven, and Foggy Day. This is followed by Frank Sinatra and Sammy Davis Jr. performing Me And My Shadow, complete with their famous soft shoe routine. This builds to a climactic ending, and the three stars finish the night with an exciting ensemble version of The Lady Is A Tramp, which is followed by a thrilling encore performance of Mack The Knife. 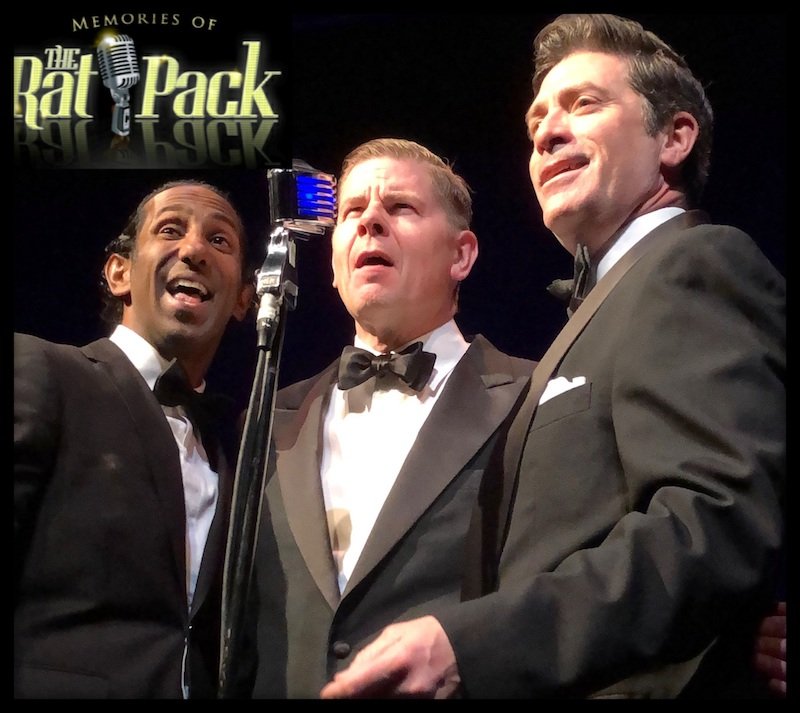 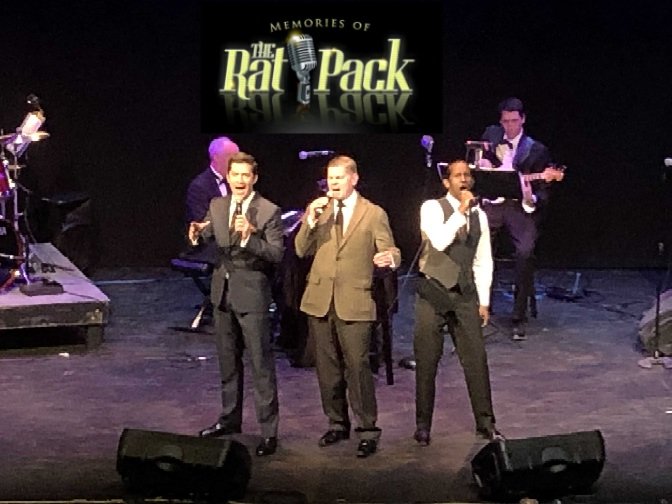 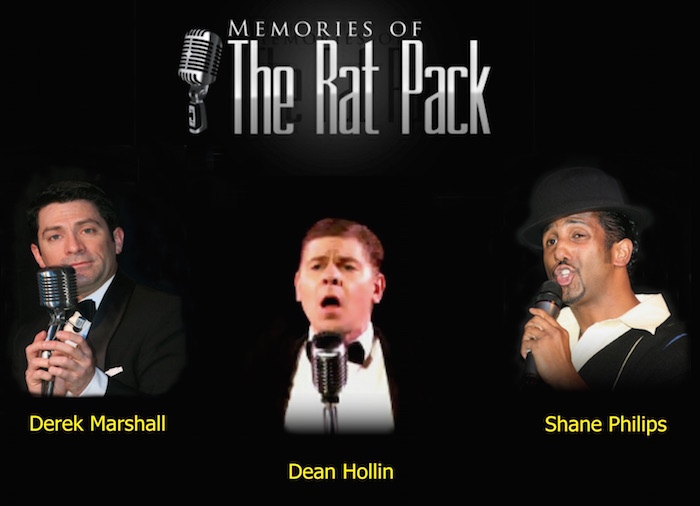 Act Two
When You’re Smilin’ [Drinkin’] (Dean)
I Left My Heart In San Francisco (Dean)
Volare/On An Evening In Roma (Dean)
I Don’t Care If The Sun Don’t Shine/I Love Paris [Vegas] (Dean)
Saturday Night Is The Loneliest Night Of The Week (Frank)
Luck Be A Lady
One For My Baby (Frank)
You Make Me Feel So Young/Come Fly With Me/Young At Heart/Fly Me To The Moon (Frank)
Strangers In The Night (Sammy)
What Kind Of Fool Am I (Sammy)
Funny That Way (Sammy)
Hey There (Sammy)
Mr. Booze (Frank, Dean, Sammy)
Braziers [Brazil] (Frank)
I Can’t Give You Anything But Love (Dean)
Too Marvelous For Words (Frank)
Pennies From Heaven (Dean)
Foggy Day (Sammy)
Me And My Shadow (Frank & Sammy)
The Lady Is A Tramp (Frank, Dean, Sammy)

“The trio finished up the show with a bang, doing a swinging version of Make the Knife which left the audience buzzing happily into thee night.”
– Greg Burliuk, Kingston Examiner

“One song even sent shivers down my spine. Philips did a version of Mister Bojangles that conjured up memories of Davis.”
– Greg Burliuk, Kingston Examiner

“Sit back and enjoy!” And one should do that, enjoy! But the sitting back won’t last too long, the rhythm which comes down from the stage is just too infectious – presented by the three strong performers and an exceptional big band.”
– Magdeburger Volksstimme