Why this show and why now?

It’s 50 years since the Beatles went to America. It’s also 50 years since Angie married
Jim McCartney, Paul’s Dad, and was ung headlong into a magical mystery tour of her own with 4 year old daughter Ruth. She’s hosted rock stars and royalty, bus drivers and billionaires, and, at 85, she’s still helping run the family multimedia business at the beach near Los Angeles. These girls have lived history, and are still making new stories every day with Ruth’s husband Martin and the cast of crazy characters

What, Where and Who?

Meet The McCartneys is a truly real show about real people.
We’re not talking “real” mayonnaise that comes in a jar. We’re not talking “real” talentless people who appear to make millions despite never actually going to work.
We are talking the real family of a real Beatle who are making their way in the multimedia jungle of Hollywood, month to month, sometimes day by day. They may not have fame and fortune, but they live their best lives with fabulous food, fascinating people, struggles and successes in a funky location in the small, hippy beach town of Playa del Rey near LAX airport.

Ruth, Angie and Martin , their Man Friday, Christian, and a revolving door of hot young temps and interns keep the clients coming back for more, while the expertise and guerrilla marketing ways of the web, mobile and social networks keep the bottom line in black ink. Sometimes. Billionaires can go bankrupt. Celebrities can crash and burn, but the team at McCartney keeps swinging for the fences. Some Sundays see them on a private plane to check out a resort and its marketing. Some Sundays see them clipping coupons and making dinner from leftovers.

So pull up a chair to the kitchen table where it all started and come with us down the long and winding road….

At almost 85, and as the only living person to parent a Beatle, Angie is as feisty as ever.
A recent author of “My Long and Winding Road,” a co-star of the touring Beatles’ Tribute show “The Magical History Tour,“ a UK radio presenter via satellite, a Kentucky Colonel, the entrepreneur of an organic tea company, Mrs McCartney’s Teas, a Unitarian Church Minister for same sex weddings, and now a documentary lmmaker about why there are “so damned many Beatles’ tribute bands” all over the world, you’ll come to understand that there’s no slowing Angie down.

Beans on toast for breakfast.
5000 Facebook friends during lunch.
Bottle of Chardonnay for dinner.
Angie’s motto is “sleeping’s for dead people.”

Growing up in Liverpool in the 1960s with house guests such as John Lennon & Jimi Hendrix, nothing much phases Ruth. Her pocket money was made helping Angie sort out fan mail on their dining table and packaging it up for Beatles Fan Club Secretary Freda Kelly, who is the subject of a recent award winning documentary “Good Ol’ Freda.” During Ruth’s pop-star period when she was signed to BMG, she toured Russia, Siberia, Uzbek and all the Stans, & became known as “Moscow’s Madonna.” Now, as CEO of their family business branding & digital agency McCartney Multimedia, Inc., she knows all too well the struggle of cash ow, the constant barrage of free ticket requests, the madness of their celebrity clients who want to Tweet for themselves,
the rigors of travel and public speaking, and trying to break the stereotype of the rich bitch housewife with a hobby business.

And like Bette Midler, she’s married to a Kraut. Martin’s a rocker/producer from Frankfurt and he’s in the middle of converting to Judaism. Which is a Mitzvah. They need tall guys like him.

Martin Nethercutt – The Viceroy of Vibe

Living with both the wife and mother-in-law for 20+ years, he’s nally come to the conclusion that “you buy one, you get one free.” As the long-haired, long-su ering musician, producer of “The Magical History Tour” and Chief Creative O cer of McCartney, Martin has produced an extensive music library, the rst of a trilogy of solo albums under the name “GEIST”, worked on Slash’s album in 360 view MatiVision® and, he recently spearheaded an alliance with the company’s new partnership McCartney-Group GmbH in Vienna, Austria, which manages not only musicians, but has a sports division of up-and-coming young star tennis players.

We are introduced to the Playa del Rey o ces, the madness, the phone calls, the family, the cats, the raccoons and the pet possum, Prince Phillip.

Is on the phone struggling with bank lines of credit, has to prepare her celebrity radio gossip show, and is in the middle of wedding rehearsals for Tim and Don, a gay couple who have planned a Beatles themed wedding. Then, the plumbing gives way and “brown stu ” starts coming up thru the bathtub. It’s just another day.

Is trying to nd an art gallery for a visiting Austrian painter – one space has just fallen thru and everyone else is either booked or wants a fortune. The painter doesn’t speak any English and is in a timezone 9 hours ahead in Vienna. And then she nds out the paintings are NOT in Miami. They’re in storage in France.

Is trying to coax a perfect vocal performance out of a 16 year old Brazilian wannabe pop star with her rich creepy father telling him how to do his job. Just then Martin gets a call from his keyboard player to tell him their guitar player wont be able to make the session. He’s been picked up by the FBI for fraud and is being hauled o to jail.

Is tweeting for a big celebrity and gets mixed messages from his assistant, PR rm and manager as to what are approved paid tweets and what are not. What to do without upsetting the sponsor?

Episode 6
The Beatle tribute show The Magical History Tour has a resident USA band – The Mop Tops but Martin is o ered a BIG gig with another band. Since they have all become really good friends and this other band is an arch enemy with the Mop tops on Facebook and have their own fan groups. What to do?

Episode 7
Auditions for GoGo Dancers for the show are being held at the McCartney O ces and Martin and the band are having a fun time with the girls when Angie and Ruth show up with employment eligibility paperwork and ruin everyone’s fun.

Episode 8
Beatlefest owner Mark Lapidos invites Angie to participate in one of their mega exhibitions at a meet and greet, a book signing and one of her afternoon teas. Trouble is, the tea supplier has just gone out of business and Angie has just 30 days to nd a new vendor, create new packaging and get it all drop shipped to the Westin Ballroom at LAX in time.

Episode 9
Martin and Ruth are in the o ce about to close a deal with a very religious group and they are literally praying over the contract when one hit wonder, 80s pop voice Benny Mardones bursts into the o ce and stars F&$)(;:ing and cursing about the football results. The Baptists close their folders, disgusted and ready to leave until one of the women recognizes Benny and tells him her wedding song was his Mega Hit “Into the Night” and all is forgiven. The clouds clear and the contract gets signed.
The power of fame!

Episode 10
Martin agrees to produce, and Angie and Ruth agree to sing BG vocals on a local singer songwriter’s EP. Tommy Gimler shows up with the lyrics for the girls to record to his titles “Bitch has Cats” and “I Think She’s Got a Dick.” They have a long discussion about their newly needed pseudonyms for the credits.

Episode 11
For Angie’s upcoming 85th birthday, they decide on a theme of “Rehearsal for my Funeral”. Angie feels like since she is going to miss the real thing, she might as well throw a party to see what will happen at the real wake.
Ruth secretly coerces friends and celeb clients to make a private video of “Memories of Angie” and post it to a password protected YouTube channel. Unfortunately, a very pretty but very dim intern posts the videos. But publicly. Angie answers dozens of phone calls lamenting her own demise where she has to explain to people she’s very much alive and the death thing was
just a joke. The McCartney is Dead thing rears its ugly head again. 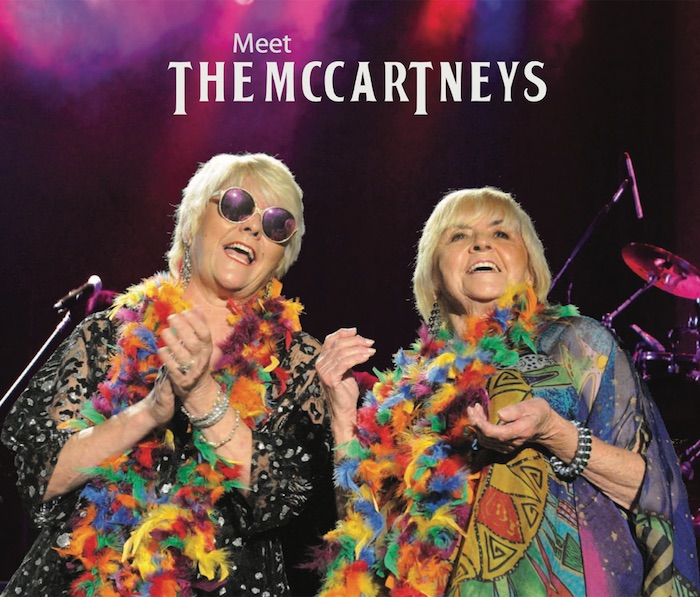 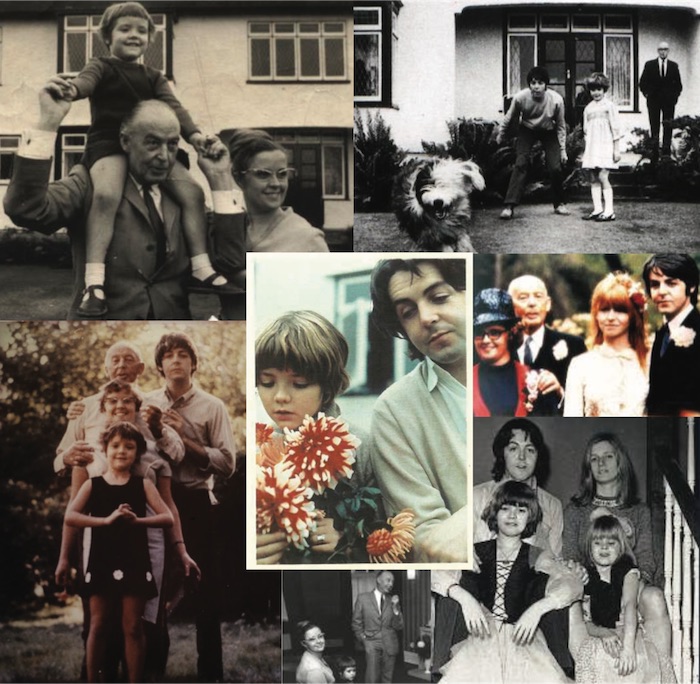 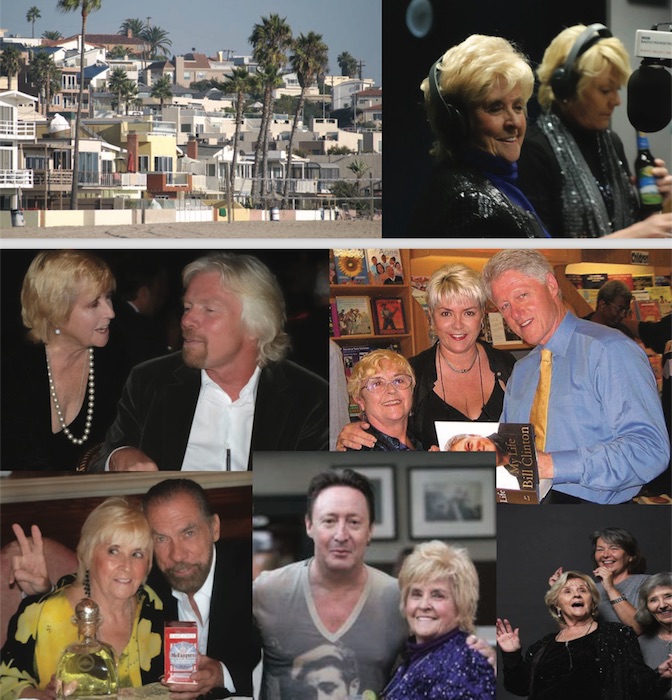 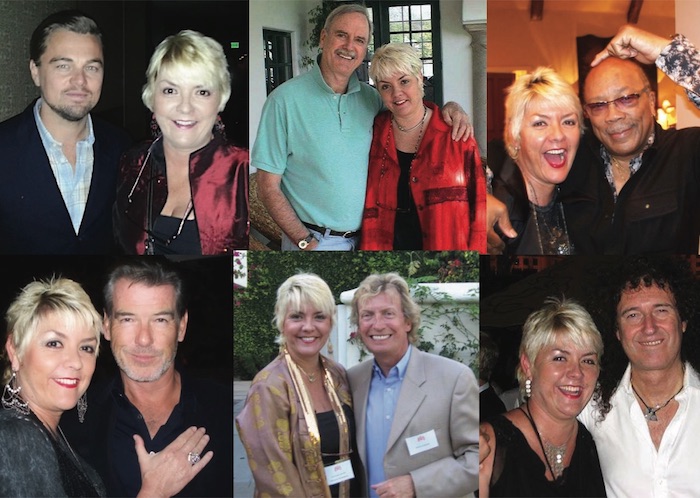